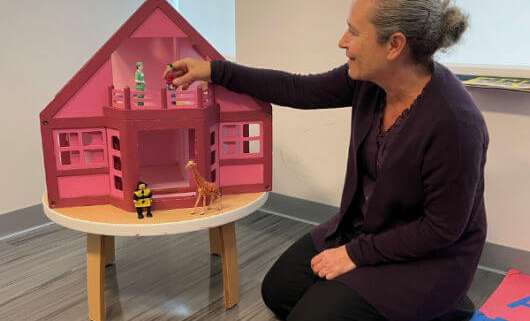 The four-year-old girl was living in a shelter when she witnessed her mother falling down a staircase and being taken away in an ambulance. The pair were separated for several weeks and when they were reunited, the little girl was clingy, anxious, and sometimes aggressive. To help the daughter process her fears, BHCHP clinical psychologist Rachel Harrington-Levey, PhD, sang songs like “My Mommy Comes Back” with them and played Peek-a-Boo to show the child that her mom’s “disappearance” was only temporary. And with Harrington-Levey and the mother present for support, the little girl re-enacted the fall over and over using a doll and a dollhouse, shaking a tambourine to mimic the ambulance sirens. “My goal was to help repair the breach that happened by helping the little girl engage, and to coach mom to acknowledge what had happened, how scary it must have felt for her daughter, and how much she missed her during the separation,” said Harrington-Levey.

Harrington-Levey is one of five therapists working on BHCHP’s interdisciplinary family team, which includes behavioral health clinicians like her, medical providers, and case managers. Their clients have been uprooted from their homes, witnessed violence and addiction in their families and communities, and experienced separation from parents and siblings, among other stresses and traumas.

Family homelessness can seem almost invisible compared to adult homelessness, because families are housed in scattered site apartments, communal shelters, and occasionally motels, generally out of public view. There are currently 3,000 students without permanent homes enrolled in Boston Public Schools. Most households are headed by a mother in her mid-20s with one or two children ages six and younger. On average, families stay in shelter between one-and-a-half to two years.

Healing Through Art and Play

For younger children like the four-year-old, play therapy is the most effective tool for healing. “The idea is to express difficult experiences through play, not language,” explained Harrington-Levey. For older children, art therapy is one of the best modalities — using visual art, music, or storytelling to make sense of what they’re going through and to heal. “It’s all about giving kids the space and attention to bring up whatever is going on with them and it’s great to do this through art and play. For therapy to be effective, it has to be fun, something they want to do,” she said.

One 11-year-old boy she worked with was temporarily placed in foster care while his mother was treated for a substance use disorder in a residential program. He was anxious and thought he was partially responsible for the separation. Harrington-Levey suggested mother and son create a chapter book about the experience. Mom would write down the story while the son narrated it to her, then he illustrated it with drawings. “It helped him understand what had happened and gave them a way to talk about their feelings together,” said Harrington-Levey. “Telling your story in an in-depth, detailed way can be very therapeutic.”

Harrington-Levey also teaches her young clients to name the emotions they’re experiencing and how to calm their bodies through mindfulness techniques when the feelings become too intense, using analogies a child can understand. For example, learning yoga breathing involves a simple exercise called “hot chocolate breath” — inhaling through the nose to experience the aroma, then blowing out through the mouth to cool it down. “It’s very gratifying to see a kid who didn’t know what to do with their emotions calm themselves down and learn how to say to their mom, ‘I’m angry.’”

Working with parents is a large part of Harrington-Levey’s practice and she has regular consultations with them about their children’s progress. She also stays in touch with teachers to understand how her clients are functioning at school.

When families lack a permanent home, the parent’s role as emotional ballast becomes even more important. She teaches basic parenting skills, like how to soothe a child who is feeling out of control — something that can feel very challenging to a parent experiencing their own extreme stresses. Helping them establish family structures and routines is also critical. “We want the parent-child relationship to be as stable as possible because there are so many factors in their lives they can’t control,” said Harrington-Levey. “Our overall objective is to help parents and kids maintain good relationships and promote healthy development, despite the disruption of becoming homeless,” she said.

The opening of the family team’s new flagship clinic in collaboration with Horizons for Homeless Children, offering integrated behavioral health and medical care, has been a gamechanger, according to Harrington-Levey. Previously, family team members were itinerant, traveling from shelter to shelter, hauling bags of toys and other therapeutic tools. They would do their work in whatever space was available, which often meant meeting in families’ bedrooms or in common areas.

The new clinic has a light-drenched play therapy room, with a colorful mat on the floor, and is filled with toys and art supplies. And because it’s the team’s first home base, clients from shelters the team didn’t have the capacity to visit in the past can now use its services. The clinic is located in the new Edgerley Family Horizons Center in Roxbury, an early education/social services hub for families navigating homelessness, which expands the team’s reach even further. And for the first time, Harrington-Levey and her colleagues can continue seeing families after they’ve become housed.

What sustains Harrington-Levey and allows her to do such difficult work day in and day out? Being part of an interdisciplinary team, which includes case managers, is key, she said. They help troubleshoot issues like transportation and school enrollment, so families can fully engage in therapy. “And the kids are amazing and resilient,” said Harrington-Levey. “No matter what they’ve been through, they continue to learn and grow.”