Home > Slideshow of Pictures: House Calls for the Homeless 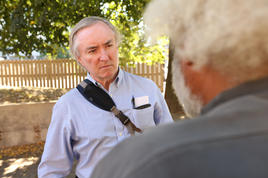 Dr. Jim O’Connell went to Harvard Medical School at the age of 30. After finishing his residency at Massachusetts General Hospital, he was on his way to an oncology fellowship when the city of Boston received a grant, along with 18 other cities, to improve their health care system for the homeless.

At the suggestion of his chief, O’Connell took what was supposed to be a one-year position as the founding doctor of the new health care program for Boston’s homeless. That turned into a 32-year career as head of the Boston Health Care for the Homeless Program (BHCHP).

Photographer John Baynard has recently been shadowing O’Connell, documenting everything from his street work to the exam rooms.